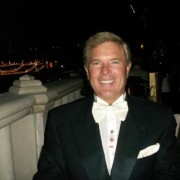 ORANGE COUNTY (OCWEEKLY) — In the 1990s, you could not serpentine around a champagne server at a high society soiree in Orange County without bumping into Richard and Jolene Engel. They were everywhere, even landing aboard the P’zazz yacht when the Nordstrom family hosted a private Newport Harbor supper-cruise for New York designer Donna Karan and her artist-sculptor husband Stephan Weiss. That was then. Now divorced, the Engels pleaded guilty Friday to failing to pay taxes on more than $180 million in unreported income from their Costa Mesa business that was supposed to refurbish the AES Corp. power plant in Huntington Beach. Their next fancy parties could be in state prison.

It’s been a mighty fall for the power couple, who were part of the small after-party for Mikhail Baryshnikov after Misha had just made his Orange County dancing debut in August 1993 in what is now known as the Segerstrom Center in Costa Mesa.

Opera lovers, the Engels routinely sponsored the appearance of divas who sang in Opera Pacific productions. They arrived at the now-defunct presenter’s 1700s-themed masked Opera Ball in November 1990 wearing powdered wigs and matching, custom-made outfits in their signature colors–blue and cream–the same hues of their 12 cars and the offices of their Powerplant Maintenance Specialists, Inc. (PMSI) in Costa Mesa. Richard Engel told a society reporter covering the ball at the time that it was “better than Halloween.”

Besides scaring up the party circuit, Jolene Engel gave generously to Republican candidates, including the presidential runs of both Bushes.

Jolene Engel was president of PMSI, which billed itself as specializing in building and maintaining coal-fired power plants for investor-owned utility companies, and Richard Engel was the chief financial officer between 1998 and 2001, when the company’s gross revenue exceeded $180 million. Richard Engel’s bio stated that among his areas of expertise as principal and corporate counsel were bankruptcy and unfair labor practices.

That last skill is interesting because in late 2000, the Orange County District Attorney’s office (OCDA) got a call from a labor union regarding possible fraud related to unpaid PMSI workers rehabilitating the AES plant–the one with the big smokestacks along Pacific Coast Highway in Huntington Beach. A year earlier, the Engels had entered a contract with the plant’s then-owner, Southern California Edison, to refurbish the facility for around $108 million.

After two years of investigation by the OCDA and the California Franchise Tax Board that began with a search warrant served on PMSI in January 2001, tax evasion charges were filed against the Engels. “This is the first tax evasion case this office has seen where the money owed to the state is in the eight figures,” Orange County District Attorney Tony Rackauckas told reporters at a press conference back then.

The Engels were “living lavishly in Newport Beach, flying on a Lear jet, driving beautiful cars and charging personal luxury items, such as jewelry, to the company,” Rackauckas said. “Here is the bottom line: Everyone has to pay his or her fair share of taxes. No one has the right to refuse to pay their taxes and spend their money on luxury goods.”

Denise Azimi, a spokeswoman for the state Franchise Tax Board, added that, “Our investigators painstakingly reconstructed their income,” thanks to 88 boxes of evidence that included bank records, computer files and other documents.

An attorney for PMSI, while not yet having dug through the boxes, said at the time the company owed nothing, nothing was even owed to anyone and that the state and OC authorities had “overstated” their case and made “several misrepresentations.”

But, as proven with the guilty pleas, between Oct. 4, 2000, and Dec. 31, 2000, the Engels received more than $36 million from AES, yet PMSI did virtually no work. Of that, the Engels diverted more than $24 million for their own purposes, which included buying expensive jewelry and cars (we know which colors!), a $1 million down payment on a Lear jet for Richard Engel and more than $1 million for other companies he owned. Richard Engel even used money from that diverted pool of AES cash to pay $8.5 million for Jolene Engel’s stock in PMSI when they divorced.

Before the scheduled June 1, 2001, date of work completion, PMSI received nearly $100 million from AES as full payment on the balance owed on the contract. But no work was done by the deadline because PMSI had not obtained the required construction permits.

Nonetheless, the Engels continued diverting funds paid by PMSI for their personal expenses. Meanwhile, their company was left with insufficient funds to pay for workers and materials on the AES job. The plant owner paid another $35 million to keep the project afloat. Meanwhile, on June 30, 2001, Richard Engel took over as president of PMSI, which never completed the project, and left workers, subcontractors and creditors unpaid.

That’s not all who failed to get paid. The couple routinely filed state tax returns claiming they received little or no income in years when PMSI made millions from projects all over the country. Even if their position was they made most of their money out of state, a California return must still be submitted annually, and at minimum $800 would have been owed each year.

Richard Engel filed false tax returns in 1998 through 2000 and no return for 2001. In late 2000, he claimed no income for 1998 and 1999, and in March 2001 reported only $144,231 in income. During this time, Richard Engel received millions of dollars from PMSI, which, the OCDA notes, he spent on personal luxuries including stays at Four Seasons Hotels, a 1999 Bentley, jewelry and other expenses.” Jolene Engel also failed to file personal income tax returns for 1998 through 2000, despite receiving a salary from PMSI and unreported income including the $8.5 million she received in 2000 for her stock in the company and approximately $3.7 million in 2001.

Prosecutors got Richard Engel to plead guilty Friday to four felony counts of failing to file tax returns for his corporation, three felony counts of filing false personal tax returns, and one felony count of failing to file a personal return. He also admitted to sentencing enhancements for fraud in excess of $500,000 causing a loss in excess of $1 million. He could get up to 12 years and eight months in state prison at his sentencing scheduled for Aug. 3, 2012, in Santa Ana.

Before they are sentenced, the now-ex-couple must pay the state tax board $1.2 million. They also have to come up with $2 million in restitution. Wonder what a used blue and cream Bentley fetches these days?​