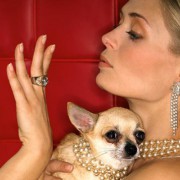 Income isn’t the only thing that separates the “1-percenters” from the rest of us.

As it turns out, the wealthiest of the wealthy — now at the center of coast-to-coast political protests by the Occupy Wall Street movement — also seem to manage their credit better, according to the Huffington Post.

Though America’s richest households (those earning $344,000 a year or more as of 2009) make 225 times more than the average median household, they also rely heavier on credit than the remaining 99 percent of the country. But because they manage their credit card debt better, the 1-percenters’ average credit score is 704, as opposed to the 99-percenters’ average of 637, the Post reports.

Higher scores — which are earned by paying bills on time and avoiding collection agencies, as well as maintaining a balanced credit portfolio — mean better rates and access when it comes to loans or new credit cards.

And in the long run, that might help reduce the income gap.

Meantime, the lesson for most of us is this:

Money alone doesn’t give you a higher credit score. It’s how you manage the money you have.

That’s where we come in. Contact us — we can help you resolve your debts and regain your financial balance.